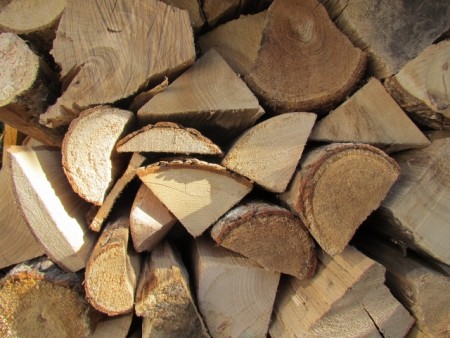 We often get asked what is the best firewood for burning in my stove or open fire. Well, after the obvious points of only using kiln-dried and hardwood, we would have to say that Ash Logs consistently come out tops for reliability, cleanliness, good burning and good value. Birch is another high scorer but can be prone to mould in this damp country of ours. Oak is great for heat and long burn times but can be slow to get going. Beech is another great firewood but overall Ash has been our top seller and is the most consistent performer.

Ash is one of the most widely planted broadleaf trees in Ireland and is particularly special for the Irish as it is the wood used for making hurleys. Due to its flexibility, strength and resistance to splitting, it is the ideal wood for a hurley or caman though there is a growing tendency now amongst GAA players to favour synthetic hurleys which seems a shame. Our Common Ash (Fraxinus excelsior) is a broad, spreading, deciduous tree growing at a fast rate to 25mtrs in height by 20mtrs spread. This rapid growth and the ability to re-sprout after being coppiced made ash a valuable renewable tree to the early Irish and up until recent times. Ash can completely regenerate from the stool: after cutting, the hard wood was allowed to rest and renew for about ten years before the next cut. Ash wasn’t just for hurleys of course –  it’s been the raw material used in the production of coach axles, furniture, tool handles, oars, walking sticks and more recently, snooker cues. Grown commercially Ash grows tall, lean and dead straight making it smooth grained, strong and easy to split, thus making it a perfect firewood.

Ash in the Garden

Gardeners sometimes view Ash as a bit of an underachiever in the garden: it’s the last leaf to blossom in Spring and the first to drop in Autumn. But its pinnate leaves are beautiful and allow plenty of dappled light for undergrowth. The common Ash or Fraxinus excelsior is probably too big for most suburban gardens but if you have the room it’s certainly a lovely thing to plant. Native Ash can be grown in full sun or partial shade and prefers moist, deep, rich soil. Why not create a beautiful garden picture by planting ash in a woodland section of your garden complete with under plantings of shade tolerant shrubs, perennials and bulbs. Ash has a light canopy and casts little shade.

Ash contains less moisture than other kinds of trees so has always been a popular firewood. It will even burn without seasoning (though not very well) a quality acknowledged by the old English saying: “Seer or green, it is fit for a queen”. It burns excellently and is clean to handle.

“Join the Best Logs mailing list now to stay up to speed with articles like these and never miss out on discounts for our kiln dried firewood!”

Monday-Friday: 9am to 5pm
Saturday: 10am to 2pm
Sunday: Closed

Best Logs are the No.1 provider of Kiln Dried logs and firewood to the Irish market. Our kiln dried logs are sourced from sustainable forests and burn hot and clean and make for excellent firewood for even the coldest Irish nights. We offer free delivery on our kiln dried logs & firewood and if you've any questions please contact us.

What Lights Your Fire?